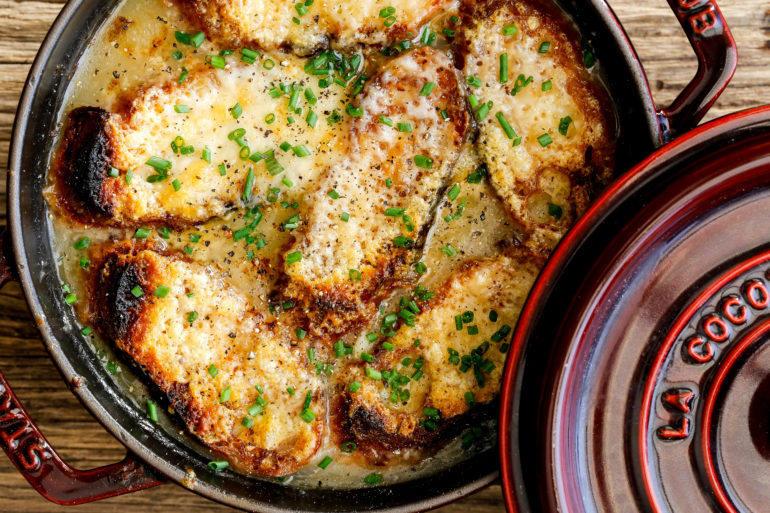 Skinnymixers French Onion Soup from A Little Taste of France is a simple, classic french recipe made so much easier in the Thermomix. This quick version will have you coming back for a 2nd bowl.
ALToFDairy freeDinnerFreezer FriendlyFrenchGluten FreeHealthy KidsLCHFLow CalorieRecipeSoup One of the most famous French recipes also happens to be one of the humblest – this French Onion Soup Thermomix recipe is featured in my cookbook A Little Taste of France.

It was seen as a peasant food, with onions and meat broth being the primary ingredients, and at some point in history someone had the genius idea to put baguette and Gruyere cheese on top.

There is also a slow cooker variation that you can take advantage of to have dinner nearly ready when you return home from work! French Onion Soup is one of the most famous French recipes and it doesn't need to be hard to make at all. This Thermomix recipe has a beautiful depth of flavour, while being quite easy to make and not needing several hours.
Prep Time5 mins
Cook Time58 mins
Total Time1 hr 3 mins
Author: Skinnymixers
Recipe type: Appetizer
Cuisine: French
Keyword: Dairy Free, Freezer Friendly, Gluten Free, LCHF, Thermomix
Servings: 6 I am passionate about creating healthy food without sacrificing on taste, and understand the need for flexibility to cater for a wide range of dietary needs.
My 14 Cookbooks have now sold over 400,000 copies & Skinnymixers has grown to be the largest healthy Thermomix recipe Facebook Community with over 230,000 Skinnies.

to the Skinnymixers Newsletter
18 shares